So I’m planning to meticulously analyze the approximately 2,039 photos and videos I took during my semester abroad, looking at everything from where the picture was taken to who/what is in it, whether it is a “repeat” picture (one I took again, usually in case the first wasn’t quite how I wanted it to be), and whether it is a close-up or far-away shot. (The actual list of attributes to be examined is far from final.)

Our textbook for our Visual Rhetoric class, Reading Images, spends a chapter discussing the different types of “conceptual representation” (as opposed to narrative representation) used in visualizations. I specifically found relevant the “symbolic process”, which is basically defined as representing what a subject “means or is”. The book uses an old painting of a man sitting in his study surrounded by objects that clearly represent some part of that man’s identity. A similar example pulled from my own Facebook profile pictures album can be found below this paragraph. The point of the objects in the image is not to illustrate the objects themselves, but for them to represent something else—in this case some part of my own self/identity. 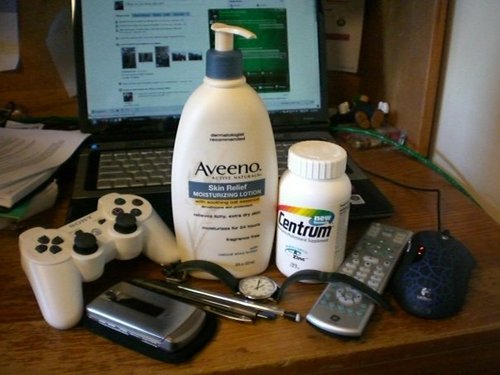 The PS3 controller represents my affinity for video games, for example, while the moisturizer is meant to convey that my hands tend to get very dry in the winter (though I see now that there are other possible interpretations. Anyway…).

Alright, so I understand symbolic processes. How does this concept apply to my project? Well, let’s specifically take one aspect I plan on analyzing in my photos: what the subject of the photo is: person, animal, building, interior, or landscape, and so on (deciding on these final lists will definitely take some thought and revising). I’m hoping that this project will help me to better understand some aspect of myself; specifically, in this example, the kinds of things I tend to focus on, that I tend to think significant enough to devote photographs to while not bothering to snap pics of others.

So let’s say I represent these subjects as silhouettes: a person standing, a bird, a famous building/landmark (Big Ben, perhaps), a mountain (for landscapes). I’ll then resize each of these objects in relation to each other depending on what proportion of my photos actually had those objects as its subjects. Ideally, this series of silhouettes, which on their own are essentially pointless pictures, will serve as symbols of my observational tendencies—an abstract concept that is really impossible to represent except by some technique like symbolism.

As illustratively demonstrated by Scott McCloud, the types of word-image combinations found in comics and other forms of visual rhetoric can, for purposes of better understanding, be broken down into distinct categories. The following are examples of the seven categories named by McCloud pulled from my own body of work (all of which, besides the frog, can be found in full elsewhere on this blog). McCloud’s description of each category (as quoted from the book excerpt linked above) precedes the example. (Click an image to see the original comic/cartoon, if there is one.)

"First, we have the WORD SPECIFIC combinations, where pictures ILLUSTRATE, but don’t significantly ADD to a largely COMPLETE text." 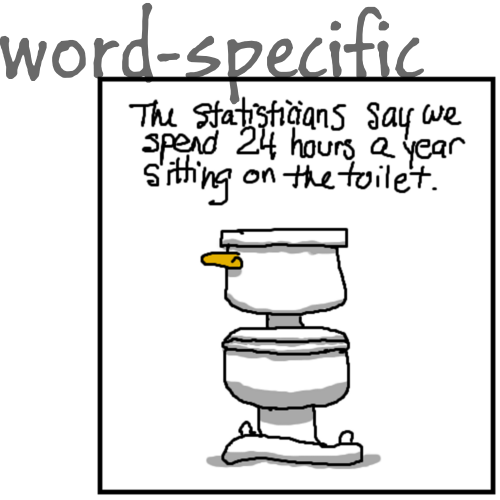 “Then there are PICTURE SPECIFIC combinations where words do little more than add a SOUNDTRACK to a visually told sequence.” 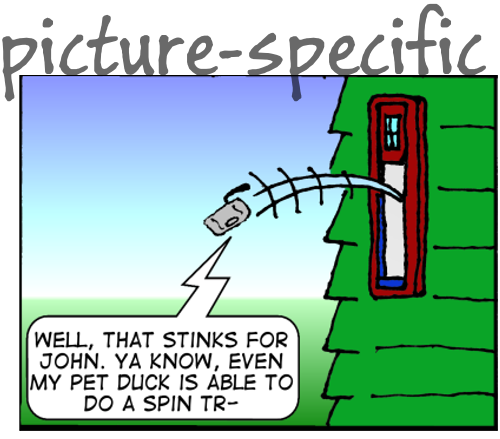 “And, of course, DUO-SPECIFIC panels in which both words and pictures send essentially the SAME MESSAGE.” 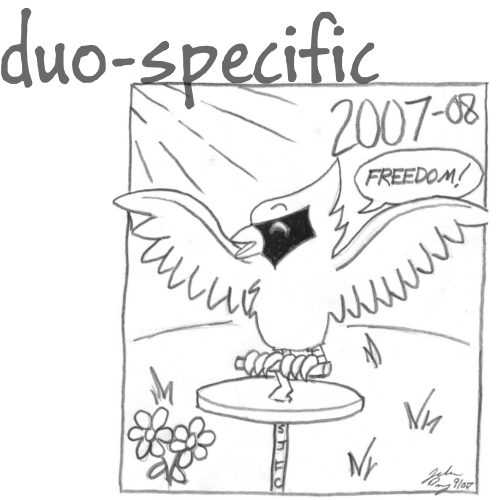 “Another type is the ADDITIVE combination where words AMPLIFY or ELABORATE on an image or VICE VERSA.” 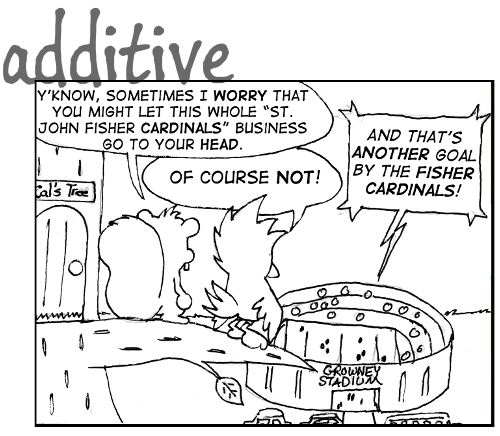 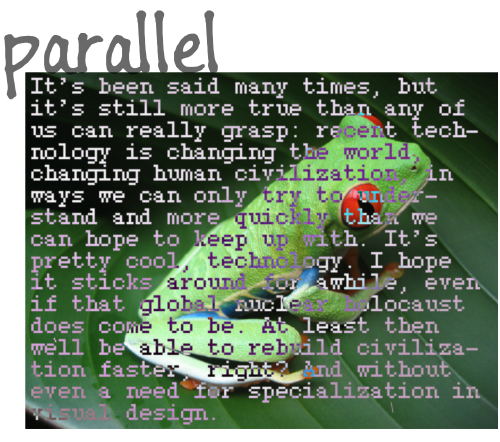 “Still another option is the MONTAGE where words are treated as integral PARTS of the picture.” 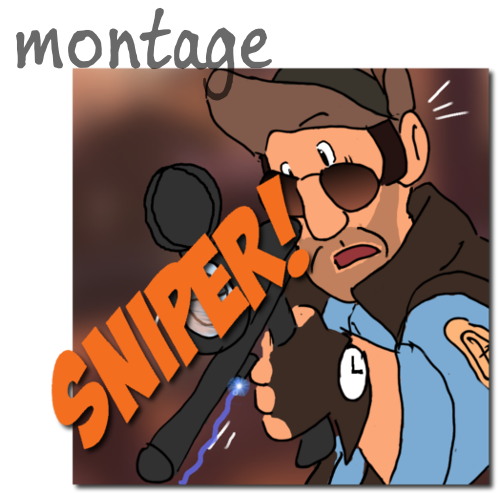 “Perhaps the most COMMON type of word/picture combination is the INTERDEPENDENT, where words and pictures go HAND IN HAND to convey an idea that neither could convey ALONE.” 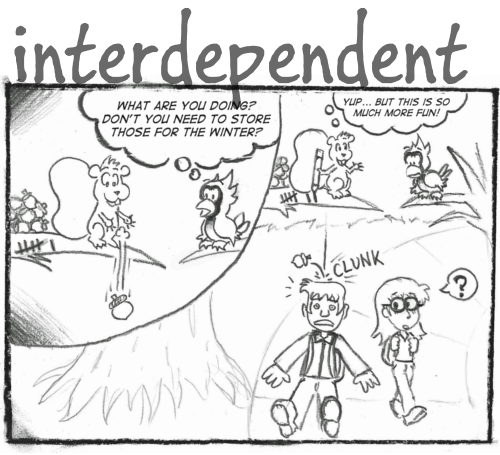 Interestingly (to me, anyway), before being introduced to this way of analyzing word-image relationships, I’d never consciously thought about it. I’d certainly never given it conscious thought while planning out and drawing any of my cartoons or comics. And yet, in going back through them to see if I could find any to serve as examples, I was surprised to find good examples of all but one of the categories (parallel) in my existing body of drawn work.

My typical comic-making process goes as such: get an idea (usually thanks to a friend or assigned by an editor), plan (write potential lines, plan within the frame limit, make a quick sketch), pencil the lines (lightly, with a hard-leaded drawing pencil), ink the lines (with drawing pens of a couple of different tip widths), scan, and edit (usually with GIMP), which may also involve adding text depending on whether I liked how I “drew-wrote” it on paper. I don’t usually draw the full frames on paper; instead, I draw the “pieces” of the picture (characters, parts of the background, word bubbles), and then put them together post-scan.

Sometimes I’ve varied from this process: my early comics involved no ink at all, being shaded with variously-leaded pencils, while more recent comics were done entirely digitally with a Wacom Bamboo Pen drawing tablet. (Not being satisfied with the quality of my digital-only work, I’ve since returned to the method described above, using the tablet only during the editing process. It’s great—though perhaps a bit expensive—for using the lasso select tool.)

Anyway, I think what we’re most concerned about here is the planning step of my process. It’s when I’m writing the first draft of the dialogue and making the first sketches that (unconscious) decisions start to be made about the word-image relationship. Because it’s an unconscious process, I naturally can’t have much to say about it. But I suppose that submerged part of my mental iceberg must remember how words and images have worked well and have not worked well in the many, many instances of visual rhetoric I have encountered in my life, from road signs to video games, and then applies that experience in informing the rest of my mind how it should go about things.

How that process actually goes, I may never know. But it doesn’t matter, because it appears that I can trust my unconscious to appreciate the importance of word-image relations when it comes effective visual rhetoric even when it’s the last thing on my conscious mind. Pretty convenient, I’d say, and a skill that I’m sure has played a large part in the development of human civilization into what it is today and to what it will be.

This post is one in a series done for a class I took as a senior in college on the visual rhetoric.

Working for OIT (The Office of Information Technology; that is, the people who take care of all the technology, from computers to projectors to microphones, unfortunately for me, flipcharts, at our school) usually has me running around maintaining, fixing, replacing, settings up, or taking down those things mentioned in the parenthetical. I’m usually interested in what I’m doing (especially when working with computer software and, to a lesser extent, hardware), and they pay me well, so I can’t complain.

There are some times that doing my job takes me out of what you—or I—would expect my job to entail. Occasionally I have been tasked to, for example, design, produce, and distribute some piece of visual rhetoric on OIT’s behalf. For example, two summers ago my boss in Media Services asked me to make step-by-step instructions for replacing a projector lamp, a relatively simple but sometimes confusing process, for the benefit of fellow and future student workers. I took the photos, wrote the text, assembled the page (positioning the pictures, choosing typefaces and sizes) and then sent the results to my boss. Since I was so proud of my work, I also printed a copy of the instructions on the black-and-white LaserJet in the Media Services office and hung it on the wall near the student worker desk. 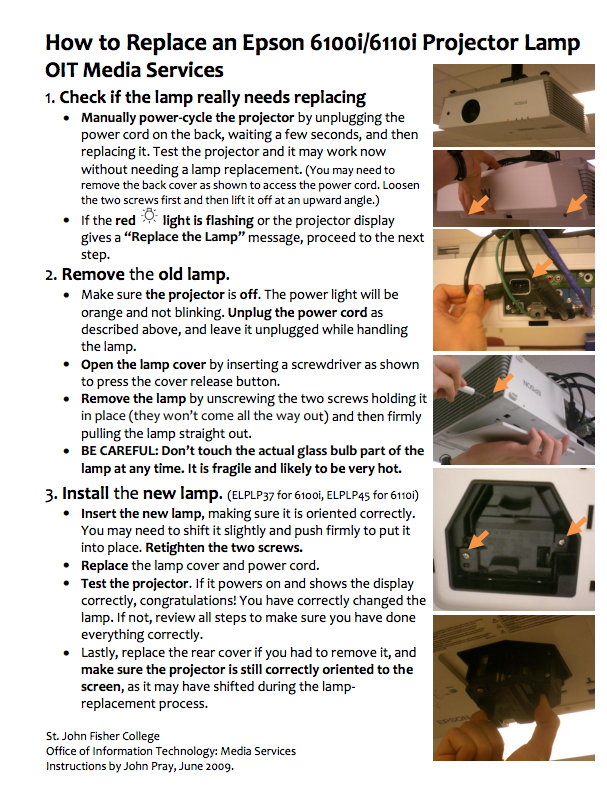 There it remains to this day, informing any student worker who cares to read it everything they need to know about replacing the lamp for an Epson 6110i projector. I served, in some capacity, every role in the creation process of this visual rhetoric; that is, there was virtually no specialization involved. I designed, composed, produced, and distributed the work of rhetoric all on my own, with minimal input from others. This was made possible by the technology available to me: digital cameras, computers with image-manipulation and publication-producing software (not to mention the Internet), and fast, cheap laser printing. This is a far cry from the days of specialization in design — days, I think, that are being quickly brought to a close by the proliferation of personal computers and, in particular, the Internet.

Why hire someone to take your pictures and design your page (or blog post, as the case may be) when you can do it all yourself with minimal additional skills or knowledge needed? Why contract some company that has no grasp of your group’s culture or ideals to create your website when you can do it yourself, being sure that you are represented accurately in every step of the process? Why ask your friend to explain some aspect of British history to you when you can find a better explanation with a quick web search?

It’s been said many times, but it’s still more true than any of us can really grasp: recent technology is changing the world, changing human civilization, in ways we can only try to understand and more quickly than we can hope to keep up with. It’s pretty cool, technology. I hope it sticks around for awhile, even if that global nuclear holocaust does come to be. At least then well be able to rebuild civilization faster, right? And without even a need for specialization in visual design.

(Calvin and Hobbes, by Bill Watterson. From this excellent page.)

PREPARE TO SHELL OUT SOME PUNISHMENT

Steam rises from Wall Street sewers like hot breath from a pack of wild dogs. Just below the pavement’s puddle strewn surface, the Teenage Mutant Ninja Turtles® have gathered around the leftovers of a family-reunion-sized sausage pizza with extra sauce. Usually these party dudes would inhale the mozzarella platter as if it were the last “za” on Earth, but not tonight.

You see, only hours ago, their trusted friend, April™, was kidnapped from her mobile news van by the vile, ruthless, terrorist bully SHREDDER™! He’s a Slice-O-Matic crum, a villain more vicious than an army of mind altered Bruce Lees.

With their lovely cohort held hostage, the fearless foursome must concoct a way to rescue April before Shredder brain washes her into joining his Ninjitsu Foot Clan. They’ll combine this treacherous task with the mission they’ve been on since their mutated beginnings—to thrash Shredder and capture his Life Transformer Gun, the lone piece of technology that can turn their rat friend, Splinter™, back into the man he used to be.

So take control of these heroes in a half shell, and either claim total victory over New York’s premier Kick Man … or lead them onto the menu at McTurtles (Home of the Quarter Flounder with Cheese).

Word-for-word from the instruction booklet for the 1989 Nintendo Entertainment System game Teenage Mutant Ninja Turtles, found while cleaning my room. 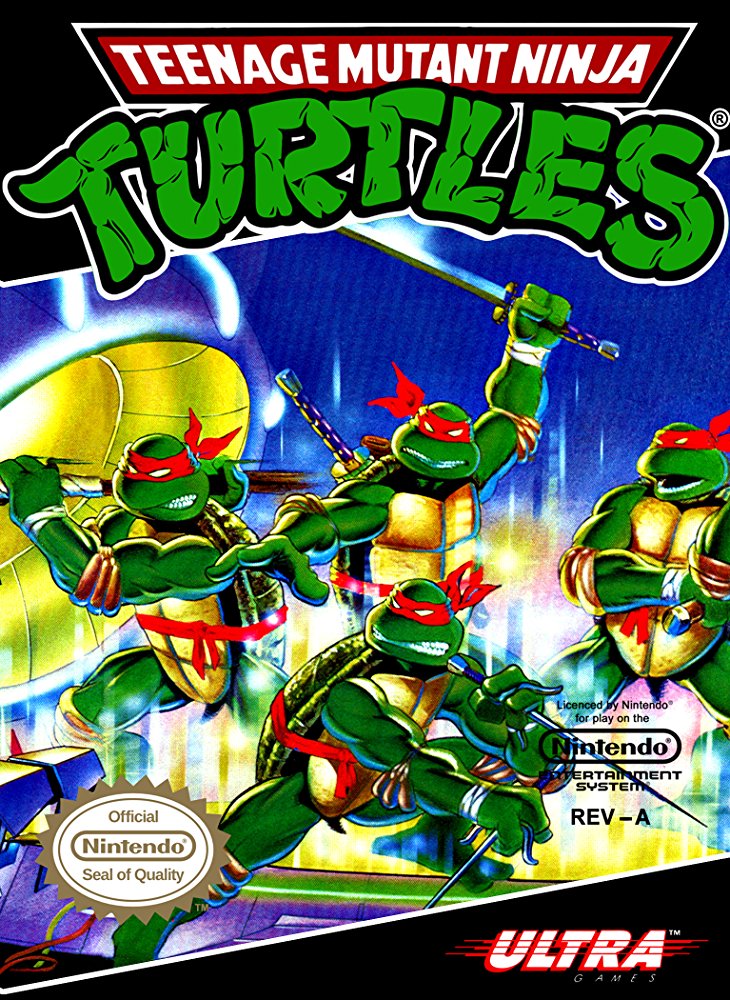 I wish I had this writer’s job.