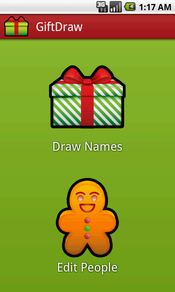 or Solving Secret Santa, Part One

Every Thanksgiving, we get together with the extended family on my Dad’s side for some good eats and good times. We also take the opportunity to draw names for Secret Santa giftgiving for the upcoming Christmas Eve gathering.

Traditionally, this Secret Santa was among the adults, each adult getting one gift, while everyone could get the kids of the family as many gifts as they wanted. But then all of us kids grew up (and haven’t yet brought along any grandchildren), and there were much fewer gifts going around, making things a little dull. So starting last year, we decided to be a little innovative: each person would draw two different names of people to give gifts to. To further complicate things, neither of those two names could be within your immediate family/household, since you’d be giving that person gifts anyway on Christmas morning.

This was a lot harder to try to coordinate with slips of paper in a basket than the old simple one-slip-per-person way had been. How do we ensure that each picker (1) gets two different names, that (2) neither of those names is in their immediate family, and that (3) nobody knows ahead of time who has their name (meaning no one person can coordinate the name assignments)? What do we do when the human mind and physical world fail us? We turn to our trusty computer overlords!

With the above-stated requirements in mind, I started in on an Android app (since I was still entrenched in Android development at the time–a habit I eventually thankfully kicked).

I managed to make something pretty and semi-functional that served us well that Thanksgiving. I passed my phone around, each person clicked their own name, they got to see their two recipients, and they got to email those names to themselves right from the app. 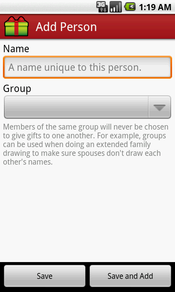 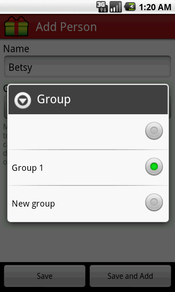 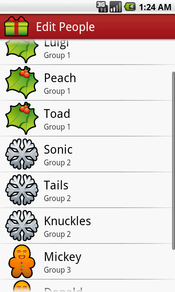 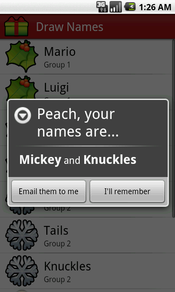 The source code for that abandoned project is available on GitHub, for the curious.

This year my immediate family won’t be around for Thanksgiving since we’re heading to Great Britain to visit my sister who’s studying abroad, so the Android app solution won’t work this year if I want to keep everyone’s names a secret from myself. Plus I like a challenge. Stay tuned for future posts where I’ll discuss GiftDraw Web, which I’m developing so that we can all draw our names from wherever we may be.