Herein you will learn of Photofo, the “simple” computer program I wrote to help me to collect the data that went into the infographic “a picture about pictures”. My goal was to look at all of the photos I took while studying abroad in London last fall (of which there were over 2,000) and use the information I could glean (1) by looking at the photos and (2) by remembering what was going on at the time the photo was taken in order to learn a bit more about the places I visited—and about myself.

In order to make the task of collecting that data realistic, I decided to harness the Visual Basic programming skills I was just learning at the time to create what I eventually dubbed “Photofo” (“photo” + “info”). Here’s a snippet of the code in Visual Basic Studio 2008: 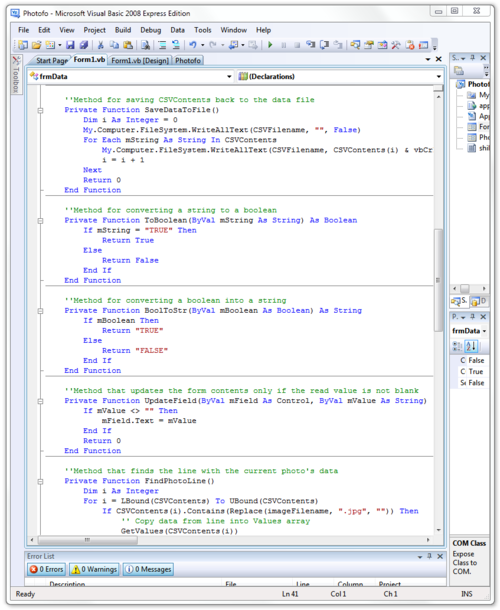 And here’s the finished product:

It’s not much to look at, I’ll admit. But when combined with some basic spreadsheets with EXIF data (data encoded in the pictures by my camera) pre-extracted thanks to Exifer, it became a full-blown photofo-ing tool. It worked like this:

And that was that (it looks like a lot less work in a blog post than it really was). It was a fun project, except for the part where I didn’t leave myself quite enough time to work through the photos at a reasonable pace (let’s just say it was my most hectic finals week ever).

The question is, where does Photofo go from here? Was it just a fun little personal project, or should I expand on and polish it for others to use? Good question. What do you think? Would you use it?