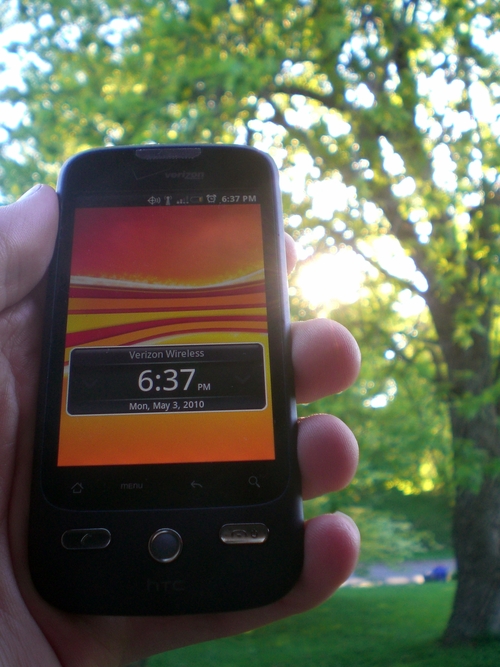 Just last week, Verizon released its latest Android smartphone, the HTC Droid Incredible. For those unfamiliar, think of it this way: it’s like a Super iPhone that can be customized however you see fit, on Verizon’s reliable network. (They’re not paying me, I swear.)

But silly me: when I got back from London in December, I promptly went out and got an HTC Droid Eris, which is just like the Incredible but with much older, slower hardware and less-featured software (which notably was missing Google’s free GPS navigation). And now that I’ve used up my two-year discount (and can’t bum a family member’s for at least three months), I’m stuck with the Eris for awhile despite the Incredible’s obvious superiority.

So, being left unsatisfied with what I have, what’s the obvious course of action? Just accept it and move on with my life? Nah. Let’s keep poking it! Being especially unsatisfied with the Eris’s lack of an update to the latest version of Android (2.1), which HTC and Verizon have kept on promising but not delivering, I’d been periodically checking up on smartphone news sites to see if the update would be hitting anytime soon. First I found out that the Droid Eris has been successfully rooted–that is, some clever folks had figured out how to access the “secret” parts of the phone that only HTC and Verizon would normally be allowed to get to, and thus anyone could put any kind of software they wanted on their Droid Eris. This tempted me, especially since I can never resist a bit of unnecessary tinkering, but it didn’t quite yet seem worth risking my first smartphone’s well-being (rooting can apparently brick a phone if you’re not careful) for little apparent gain.

But then someone at HTC or Verizon messed up and an internal test version of Android 2.1 for the Droid Eris was leaked. The collective phone-hackers of the Internet jumped on this immediately, modifying the leak to work best as they saw fit and releasing their mods to be installed on any rooted phone.

This started to excite me, since I could potentially put better software on my phone that wouldn’t have the bugs the leaked updates usually have. So I looked into it more and came across this program, made by one of those clever hackers, which all but automates the whole process of rooting your Droid Eris and installing a modded software update ROM on it. So I procrastinated, convinced myself I wasn’t going to risk it, and then did it anyway. (That’s usually how these things go with me.)

And it turned out great! I used the Sense-able 2.0 ROM on my phone, but there are plenty of other good ones to choose from. My phone is slightly faster than before, but more importantly it has all the new features of Android 2.1 that I wanted: Google Navigation, support for newer apps like Google Goggles, and little perks like being able to turn off the vibration “feature” on the soft-touch buttons. Most importantly, my tinkering itch has been scratched, and my urge for new-phone-goodness has been satisfied.

If, like me, you have a Droid Eris or a similar older Android phone (like the HTC Hero on Sprint, which is really what the Eris is, disguised) and, like me, you’re frustrated with its lack of software goodness, then maybe you’ll take the plunge like I did and root that baby. Or if not, maybe you’ll be in luck if Verizon (and Sprint) finally release the 2.1 update in the next month or two as is being rumored (and as the fact that there are even update ROMs to be leaked suggests).

Wait and see if you like, or take control of your phone like I did (as long as you don’t try to sue me if you mess it up).

Update: A few weeks after writing this post, Verizon and HTC officially released Android 2.1 for the Droid Eris. Also a few weeks after this post, I managed to kill my phone by leaving it in a puddle of water on my bedstand overnight (Learn this: Dixie cups leak when reused. Bad for the environment anyway.). Tried buying a new battery, but that died eventually anyway plus the phone started having issues, like not always registering that it had been plugged in to charge. I deemed it no longer worth the effort, since my rural-suburban life currently has little use for a smartphone, and decided to forgo Verizon’s $30/month smartphone fee for at least until I graduate and move somewhere more urban. The plus side of all of this: I get to go back to using my awesome LG VX8700 again. Despite its “dumb”-ness, I did dearly miss that good piece of hardware and software.